Reckon Point’s breakthrough technology gives a big boost to the restoration of one of Texas’ most iconic courthouses — and can do so for countless other treasured buildings.

Across the country, hundreds of millions of square feet of second-generation spaces are reconfigured, remodeled or upgraded every year: factories, offices, hospitals, hotels and more.

In many cases — especially for older properties that still have decades of life ahead of them — the necessary blueprints are impossible to track down or are severely out of alignment with the property as it exists today.

Renovations that happened generations ago were unlikely to result in a new set of drawings, and so present-day building operators and the architects and engineers who support them are faced with having to draw up a fresh set of plans showing current conditions before any new design can even begin.

That process is costly and time-consuming, and carrying it out accurately and quickly is paramount before multi-million-dollar projects can move forward. It invariably requires construction professionals to achieve measurements the old-fashioned way: one hallway, one room and one floor at a time. While they may make occasional use of a laser tool that can take a single measurement at a time, they also rely on time-honored tools that haven’t changed much for centuries: measuring tape, pencil and a notepad.

Thanks to MIGSU technology, architects and engineers will no longer have to measure old buildings using manual and time consuming methods, and they can now have added time to advance the redesign of those spaces.

Since 2014, San Antonio-based Reckon Point and founder Gabe Garza have been on a mission to bring that essential process in construction and facility management—and the tremendous global market it represents—firmly into the 21st century.

Enter MIGSU: the remote-controlled robot with small lunar rover-style wheels created by Garza and his team that might feel right at home in any Star Wars franchise. However, MIGSU’s recent missions have been right here on Earth, where it has been deployed numerous times to generate precise floorplans and three-dimensional renderings of large, often complex, commercial and industrial spaces.

A laser-based sensor—also known as LIDAR—is mounted on MIGSU’s “head.” It emits multiple beams simultaneously, enabling it to scan large interior spaces in a fraction of the time a team of architects would otherwise require. And it can do so within centimeter accuracy. Furthermore, it captures details that are often left out the manual processes simply because of the additional time required, such as noting the location of outlets and light fixtures or nuances in the contours of walls and architectural elements.

Through its integrated artificial intelligence (AI) technology, the vast amounts of data MIGSU captures are uploaded quickly onto computer-assisted design (CAD) programs used by architects and engineers -- providing an informed set of present-day conditions on which to base a major remodel or redesign. 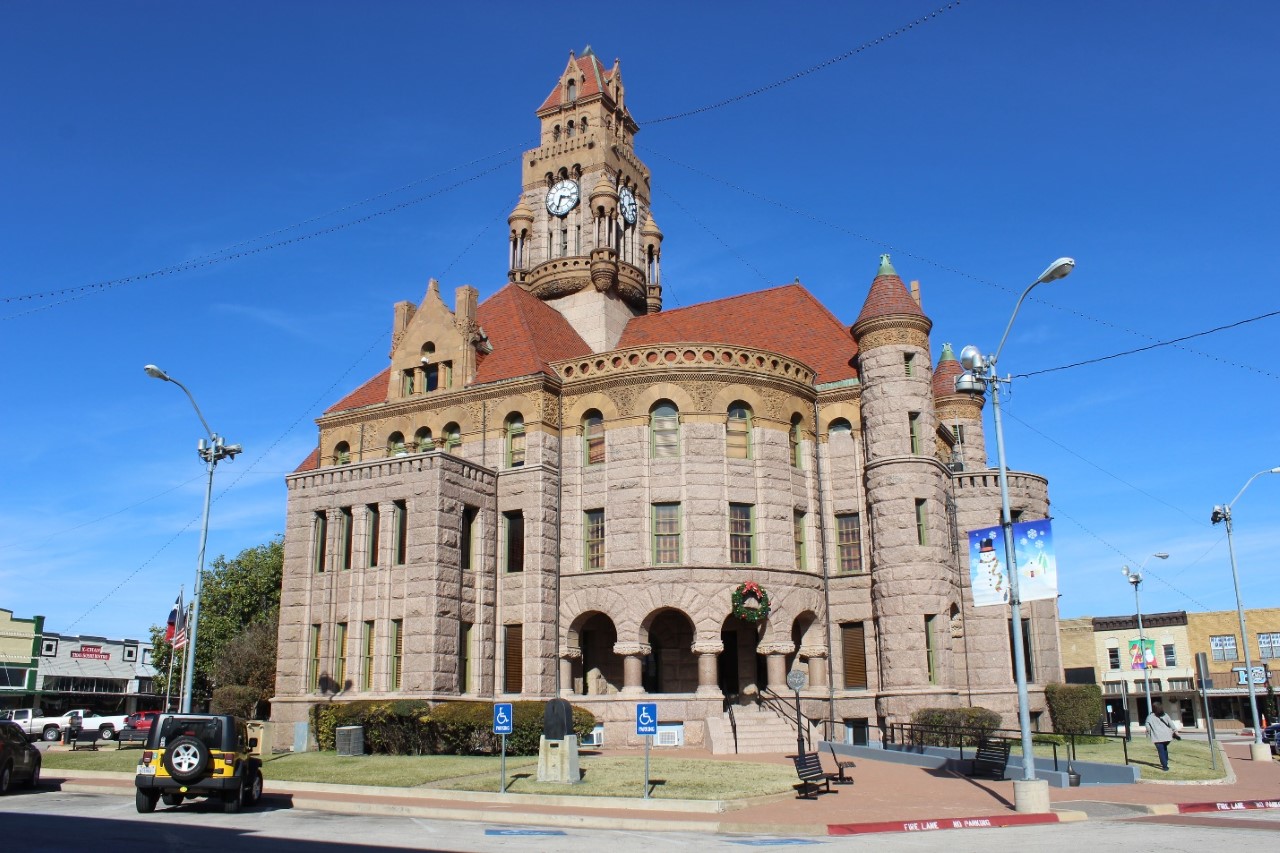 Although it is over 125 years old, the Wise County Courthouse continues as a center of local government activity. Officials look forward to numerous upgrades as the iconic building continues to serve its community in the century ahead.

That is precisely the type of innovation the people of Wise County — just southwest of the Dallas-Fort Worth Metroplex — needed before undertaking any future overhaul of their beloved courthouse located in county seat Decatur. The building was completed in 1896 and, like hundreds of county courthouses across the Lone Star State, it is still very much in use and a central part of civic life. It is home to an array of courtrooms and various local government administrative departments.

Over a period of just three days in the fall of 2020, the Reckon Point team scanned and delivered precise renderings and plans of the interior and exterior. Besides providing an accurate floorplan of interior office and common space areas, the team also detailed the many nooks, crannies and architectural embellishments of the ornate exterior. All told, it was a trove of invaluable data that will help the people of Wise County manage, budget and phase in near- and long-term work. 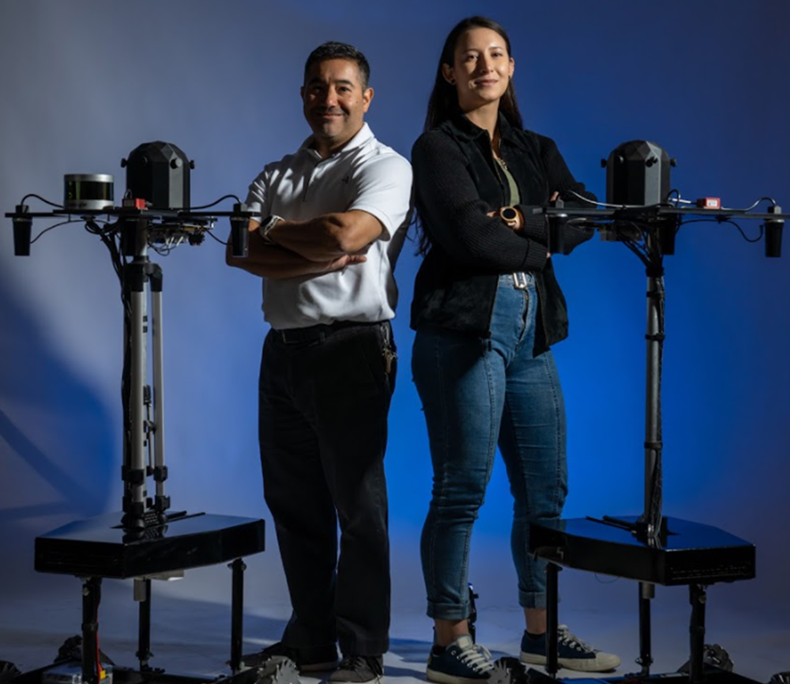 “This project was special because of what the courthouse represents — it is a central part of the history and the present-day life of one of our communities,” Garza says. “It is a quintessentially Texas building, and we are so proud to help it write new chapters in its history.”

“We were also very pleased by the reaction we received from local officials once they saw the efficiency of our process,” he adds “It was a big cost savings to them, and being able to provide this service in just a few short days makes it much easier for them to move forward with their future plans with the confidence that they have good data.” 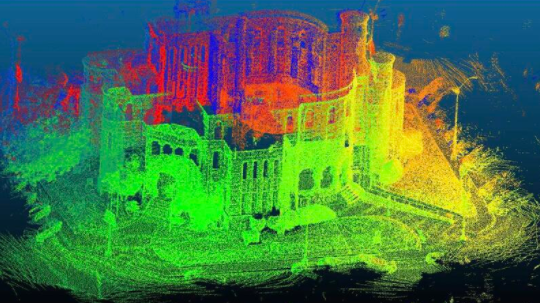 To provide a full three-dimensional rendering, Reckon Point merged LIDAR scans of the interior with exterior images taken by drones.

Lydia Unterreiner, one of the team’s software engineers, said the entire mapping process took three days only because county employees were still working inside the building.

“We would have gotten this done in a day if it wasn’t for the fact that we were coming in and out of people’s offices, and we had to wait for them to clear their workspace,” she said. “Had this been done using traditional manual measuring, it would have taken considerably longer and it would have involved a large team of people throughout the building and interrupting business over several weeks.” 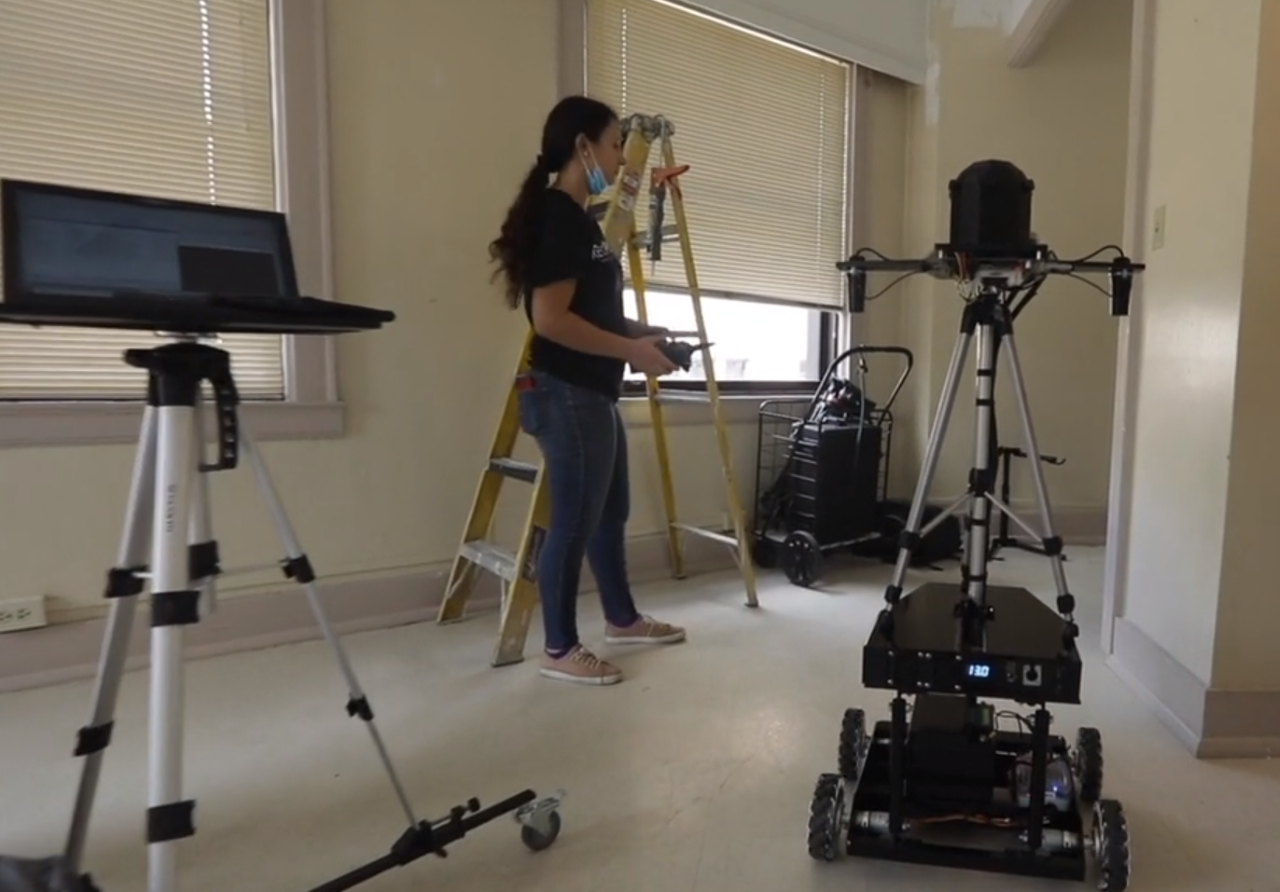 In 2019, the Reckon Point team also helped map the interior of an older office building in San Antonio.

While MIGSU’s mapping capabilities are highly sought for restoration projects like the Wise County Courthouse, the list of other applications continues to grow.

Reckon Point has been approached to adapt MIGSU to scan the exterior of aircraft fuselage to identify imperfections resulting from metal fatigue, for example.

And there are discussions that could send MIGSU to outer space. Garza has previously noted that the technology could eventually be used to map caves on the Moon that could be home to factories from which satellites can be assembled and launched with far greater ease than from Earth.

Reckon Point is just one of the many young robotic companies on the Port’s technology campus that is helping revolutionize mature industry sectors worldwide.

Port Businesses Development Specialist Stephanie Garcia, who is also on the leadership team of SATX Robotix – a group of local technology experts who routinely conduct public educational outreach and confer with one another on projects.

Other firms on the Port campus are similarly supporting and transforming larger industries, such as Plus One Robotics’ technology that enable industrial robots to “see” and “learn” as they assume dangerous and monotonous tasks in e-commerce warehouses. Similarly, XYREC has developed the world’s largest mobile robot to remove paint from aircraft and naval vessels in a fraction of the time required by traditional and hazardous chemical processes.

To Garcia and others throughout San Antonio’s robotics community, part of the job is to create a greater understanding between technologies that are merely gadgets used by consumers versus innovations — such as Reckon Point — that integrate sophisticated sensor, laser, AI and cybersecurity technology and significantly increase efficiency and safety across a spectrum of heavy industries.

“Robots that can clean your house are great,” says Garcia. But those types of robots are not solving global issues. That’s the kind of work that we have going on here in San Antonio,” she added. “These are the stories we want to share with the world.”

Reckon Point in the News