Quietly housed in the meat locker of a former U.S. Air Force base commissary is an assortment of industrial fabrication equipment and historic technology collectibles that will soon serve as part of San Antonio’s recipe for future innovation and MRO workforce growth.

The old commissary building is serving as a temporary home for the San Antonio Museum of Science and Technology (Samsat) before it moves to a newly constructed innovation center on the Port San Antonio campus. Once there, Samsat’s vast collection of technologies and youth programs will become an integral part of the innova- tion center’s STEM initiatives.

Port San Antonio—a confluence of MRO, defense and technology companies developed on the former Kelly AFB—is hoping to start construction on the innovation center by June 2020 to bring together the campus’s stake- holders while attracting future work- force candidates. The facility is envi- sioned as an intersection of technology showcase, collaboration resources and innovation center with the overarching goal of addressing challenges for local companies, including the grow- ing need for MRO workers.

Companies on the Port campus added approximately 3,000 new jobs this year, many of them at StandardAero and Boeing. StandardAero has hired approximately 300 new employees at this location in the last 2.5 years, a trend it expects to continue. Boeing, which employs around 1,200 people at its Port San Antonio site, plans to double this number in the near future to accommodate growing MRO programs.

While Boeing receives plenty of applicants for jobs on the site, thanks to San Antonio’s large veteran workforce, hiring skilled technicians is still a challenge. Jay Galloway, Boeing’s San Antonio site leader, says combing through applications to find applicants with the right skill sets is easier said than done.

“In a certain skill that I hired for recently, I went through 1,200 people to hire 180. It’s hard to find the right kind of talent—sometimes you have to be patient because it takes a while,” he says. “You have to work with places that are developing talent such as trade schools, colleges and universities.”

Both StandardAero and Boeing work with local schools such as Hallmark University, University of Texas at San Antonio and St. Philips College, which has a campus right down the street from both companies. Galloway says Boeing San Antonio’s eventual goal is to develop partnerships with these schools to create college curricula beneficial to both students and Boeing’s workforce pipeline.

For Mark Buongiorno, vice president and general manager of StandardAero’s San Antonio site, developing relationships with these schools has been part of its success in recruiting. The company also has a robust internship program, which received 250 applications last summer.

“The one thing we really pride ourselves on is [that] if you come here as an intern, you’re going to get real work to do. There’s no filing because we’re paperless. You’ll be working on an engineering project,” he says, adding that engineering projects from previous interns are currently in use at the site such as engine stands designed by interns last summer.

Kids gain exposure to tech devices such as VR headsets and 3D printers at the Port’s Youth Aerospace Expo.

To encourage students to go into STEM fields, Boeing San Antonio is heavily involved with local initiatives for K-12 students. The company recently participated in the Port’s Youth Aerospace Expo, in which it engaged with kids through technology such as virtual reality headsets and 3D printers. Boeing also recently held a STEM signing ceremony for students going into high school or college who were choosing either a STEM curriculum endorsement or career. The company brought 60 students on-site to participate in a sports-draft-like signing ceremony onstage next to a C-17 aircraft.

Aerospace companies at the Port are also engaging with Samsat. Boeing recently provided a $100,000 grant to the nonprofit for mobile STEM programming in lower-income neighborhoods through its Geekbus program. Poised to serve 240 students in 2020, the Geekbus is a mobile “maker space” that travels to different locations to provide STEM educational experiences on topics ranging from drones, rocketry and robotics to cybersecurity and structural engineering.

Aside from the Geekbus, Samsat provides a wide variety of STEM educational programs, many of them focusing on aerospace or related fields. The museum holds multiple space camps every year, typically for underserved youth, that include experiences such as building and launching model rockets with staff from NASA and JPL, as well as exposure to WEX Foundation projects focused on building 3D-printed habitats on the Moon and Mars. 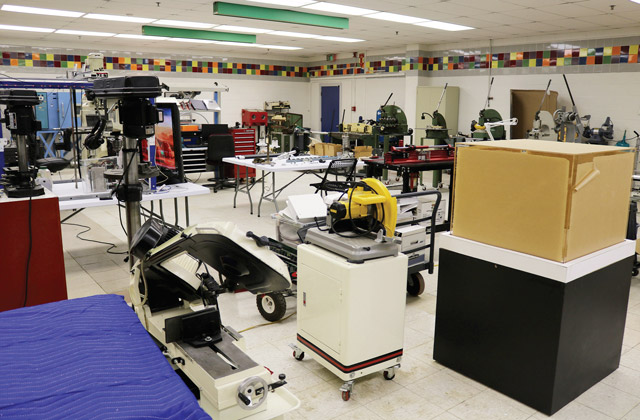 Samsat is in the process of adding 3D printers and laser cutters to its temporary co-working and maker space in the former Air Force commissary, which already features labs for electronics, optics, sheet metal and an assortment of CNC machines. Once Samsat is moved into the new innovation center, Port San Antonio’s vision is to make this technology available both for students interested in learning and for companies on-site looking to collaborate and address challenges. The hope is that established companies such as Boeing and StandardAero will not only use the space to collaborate with each other but to work with tech startups on-site such as robotics specialists Reckon Point and Plus One Robotics.

“What we see is that as the world becomes more connected, and as we move into a systems-based world, you need to start to bring all these capabilities together. Because if you try to solve it in silos, it’s just not going to work,” says Jim Perschbach, president and CEO of Port San Antonio. He adds that the Port hopes to establish “creative collisions of the right people” at the innovation center, while attracting interest from potential future workers through STEM initiatives and features such as a gaming center and robotics arena.

Perschbach says that the idea is for the innovation center to bring in 150,000 new people who could potentially be recruited into the STEM workforce. “If you get 1% of [them] actually pursuing some of the education programs and actually working with the employers, that’s 1,500 people a year going into that pathway [who] aren’t there right now to increase that recruitable market.”