Over half of the 14,000 workers at the Port are Air Force personnel—mostly professionals, including cyber security specialists, architects, engineers, and attorneys—who work for a growing number of agency headquarters at the Port. Furthermore, as additional missions relocate to the region, Port San Antonio has emerged as a leader in helping the Air Force meet pressing needs for highly specialized facilities.

The Port’s work as a strategic real estate partner to the Air Force began in 2005, when the Department of Defense (DoD) announced numerous base closures and realignments worldwide. As a result, several missions have been consolidating to San Antonio in recent years, and the Port has developed a specialty in delivering facilities that meet rigorous Anti-Terrorism Force Protection (ATFP) construction standards established by the DoD, whose regulations require that all military personnel, both uniformed and civilian, work in secured facilities. 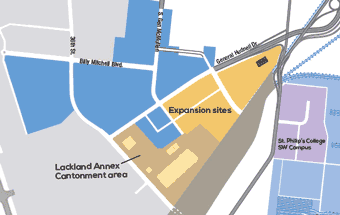 Among the features of ATFP facilities are a fenced perimeter set back from public roadways, reinforced construction that prevents structure collapse, secured gates and entries, and redundant telecommunications and power generation systems.

As a first step in its support of the Air Force, in 2008 the Port began upgrading a large five-building complex on the eastern part of the property where several Air Force agencies are now consolidated, including six headquarters that relocated to the Port from Washington, D.C. The Port has managed over $60 million in modifications to existing buildings, including the 460,000-square-foot Building 171, which anchors four adjacent facilities within the 70-acre secured site. 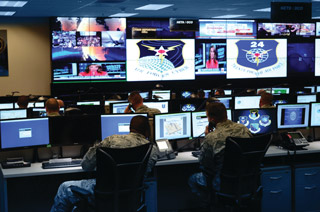 Work by the Port and its consultants during the five-year period to build the highly specialized complex included review of design, permitting, approvals of submittals, work progress reports and ensuring compliance with DoD, City of San Antonio and Port construction requirements.