SAN ANTONIO—A new road project is underway at Port San Antonio, marking an important step in the organization’s efforts to attract and grow key industries in the region.

This summer, the City of San Antonio’s Transportation and Capital Improvements Department (TCI) began the demolition of several obsolete buildings totaling over 40,000 square feet in the heart of the property.

This is the first step in extending 36th Street by an additional half mile toward the south. Upon completion in late 2016, the new road will intersect with General Hudnell Drive—providing the 1,900-acre property with redundant road connections in support of growing logistics activity.

Several obsolete buildings came down this summer to clear the way to extend 36th Street further into the property.

The road will now end near large facilities where many of the Port’s major employers are located. They include expansive aircraft maintenance workshops as well as several Air Force headquarter operations where the majority of the Port’s 12,000 daily commuters work. The road also supports the future development of industrial and mixed-use sites in the heart of the property.

The extension will end next to large facilities used by aerospace and Department of Defense operations.

“The addition of modern infrastructure at the Port is essential to support our customers and attract important new employers,” said Port San Antonio President and CEO Roland Mower. “The transformation of our large platform into a twenty-first century economic engine for the region is a true community effort. We thank the City for its longstanding and steadfast support.”

“The Port is a true community asset,” said City Councilman Rey Saldaña, whose District 4 includes the section of Port San Antonio where the new road is being built. “Investing in the ongoing evolution of the Port enhances the productivity of thousands of people who already work there in many vibrant industries. It also lays the foundation to attract good job opportunities for upcoming generations of San Antonians.”

The latest phase of 36th Street is part of a $60-million road construction effort that began a decade ago. Between 2005 to 2012, three construction phases widened and extended 36th Street by nearly two miles—from U.S. Highway 90 to its current endpoint at Billy Mitchell Boulevard. 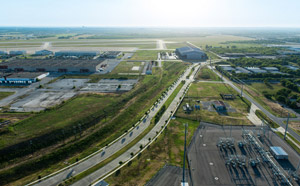 Since 2005, the Port, City of San Antonio and other partners have invested over $60 million to grow 36th Street by over two miles into the heart of the Port. The new road supports development of 400 acres for aerospace and manufacturing facilities and increases connectivity as commuter and logistics traffic grows at the site.>

Funding and construction partners over the years have included the City of San Antonio, the Metropolitan Planning Organization, the Texas Department of Transportation and the Port. The Port also oversaw design of the project while the City and TxDOT managed construction of past phases.

The upcoming extension was made possible thanks to $6 million obtained through the 2012 San Antonio municipal bond program. The Port contributed an additional $3 million to the current effort.

The road-building work now underway is part of over $100 million in recent, ongoing and upcoming capital projects at the Port.

In August, the organization announced that $5 million have been secured through City, federal and Port funding to prepare over 170 acres adjacent to the site’s runway. That section of the Port is ideally suited for the construction of hangars, workshops and manufacturing facilities.

Additional activities throughout the property include significant investments by the organization’s customers, public entities and the Port itself. Among them is the addition of over $10 million in rail infrastructure to support logistics for the region’s energy, construction and retail industries. Elsewhere at the Port, public utilities SAWS and CPS Energy are making significant upgrades to power and water distribution systems, totaling over $17 million.

And improvements to hangar and workshop facilities totaling nearly $35 million allow aerospace tenants to accommodate additional new business. The Port and its aerospace customers are increasingly focused on attracting new commercial aircraft maintenance projects as global demand for passenger and air cargo transportation is expected to double within 20 years.