Joe Glawson is a true American hero—a recipient of the Purple Heart who followed his military service as a dedicated public servant at Kelly Air Force Base.

Originally from Commerce, Texas, Joe began work as a 19-year-old apprentice at Kelly on Valentine’s Day 1942.

After Basic Training at Camp Wolters in Mineral Wells, Texas, he was deployed to Europe, where he landed on Normandy Beach in northern France in early September 1944.Within a few weeks he joined the 9th Infantry Division fighting in the Hurtgen Forest on the German-Belgian border.

He was wounded on December 12, 1944 while his battalion fought to take the town of Mariaweiler, Germany. The Battle of the Bulge started four days later. 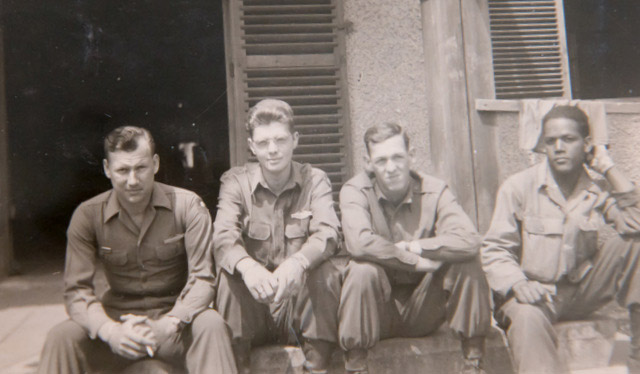 He’s a Purple Heart recipient and, because of his role in the liberation of France, he was also awarded that country’s Legion of Honor medal.

Following the war, Joe returned to his job at Kelly in January 1946. He settled back in San Antonio and began a family with his wife, Wanda.

Beginning as an apprentice, he rose through the Air Force Base’s civilian ranks.

During his long career, he came to oversee the Kelly’s fabrication department and hundreds of personnel. He and his colleagues kept countless military aircraft running in top shape, including many B-52’s.

His group even had the distinction of working on a NASA prototype capsule for the early Apollo program—creating a model for astronauts to train during a water landing.

Forty years after his retirement in 1977, Joe continues to keep active. He’s a proud parent, grandparent and great-grandparent.

A couple of years ago, he and fellow soldiers who landed at Normandy received a hero’s welcome when they returned to France for the 71st Anniversary of D-Day—an experience that he and his son, Jeff Glawson, hope to repeat in the near future.

We salute Joe Glawson and all those of his generation who built their futures at Kelly. His work and the work of his peers created the foundation for the former base to continue moving the San Antonio community forward in the century ahead.