New strategic location allows the company to collaborate with region’s innovators as it markets its products to a global clientele.

SAN ANTONIO, TEXAS – Creating the world’s biggest industrial production robot requires leading innovation collaboration, a large and flexible state-of-the-art facility to build the product, and a strategic place to showcase the innovation and connect with buyers from around the world.

Those are the key elements that attracted the Netherlands-based XYREC to the Port campus, where the company announced its first North American operation.

XYREC is a leading innovator in applied robotic technology solutions. The company and San Antonio-based Southwest Research Institute (SwRI) — a world-renowned applied research and development organization — have pioneered new methods for industrial paint removal that is an essential process for the operation of aircraft, ships and several heavy industries.

The new technology was recently lauded by R&D World Magazine as one of the top innovations of 2020 in the Mechanical / Materials category.

At the Port, XYREC has occupied a new custom-built 7,000-square-foot (650-square-meter) facility within the campus’ large aerospace complex at Kelly Field (SKF) – the region’s largest runway. The building will allow the company’s team—which includes locally-based engineers, fabrication specialists and other personnel—to assemble and continue development of its highly specialized equipment.

XYREC’s new product is comprised of a mobile robot that measures over 72 feet (22 meters) when fully extended. It is equipped with a high-powered laser that rapidly strips paint from any size aircraft with micron-level precision, including specified layers, without impacting the integrity of the airframe.

The large system stands on multi-directional wheels that allow it to move within a hangar and relocate to other facilities within an aircraft maintenance complex. 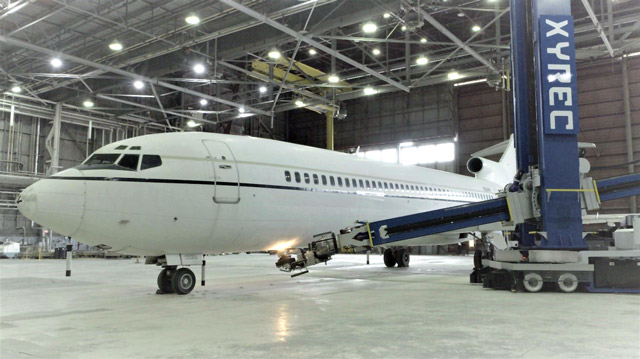 Southwest Research Institute used the B727-200 owned by XYREC to conduct tests of the new de-painting technology.

The technology revolutionizes one of the most in-demand services required throughout the decades that a typical airplane is in service. The world’s fleet of over 125,000 aircraft must be repainted on a regular basis to ensure aerodynamic efficiency and corrosion prevention, among other operational considerations. They are also repainted whenever an airline or other operator alters brand design or sells the aircraft to another user.

Traditional de-painting involves soaking the airframe with large amounts of solvents followed by further hands-on scrubbing by technicians. This costly and labor-intensive process carries with it a significant environmental impact and the chemicals could pose a health hazard to personnel.

Thanks to the new de-painting process, XYREC’s technology immediately vacuums paint particles as the laser passes over the surface of the aircraft. As the paint is removed, the particles are directly contained in a sack that can disposed of easily.

Paint stripped from a single wide-body aircraft using XYREC's laser technology generates approximately a mere two pounds (one kilogram) of waste in powder form. This is in stark contrast to traditional methods, in which the same aircraft will require approximately 475 gallons (1,800 liters) of harsh chemicals and an additional 3,700 gallons (14 cubic meters) of water to de-paint.

Furthermore, depending on circumstances, the overall process also eliminates up to 30 tons of carbon dioxide emissions per aircraft that is painted that would otherwise be generated through chemical-based methods. As the technology is adopted across the world—with a potential market of tens of thousands of aircraft as well as many more naval vessels—the overall environmental benefit to the planet will be significant.

For aircraft operators, XYREC’s technology significantly reduces costs and turnaround time and eliminates the need for storage, handling and disposal of harsh chemicals. That efficiency allows operators and maintenance shops to reduce overhead costs and return passenger, cargo and military aircraft back intro service sooner, reducing turnaround time by up to 60 percent. 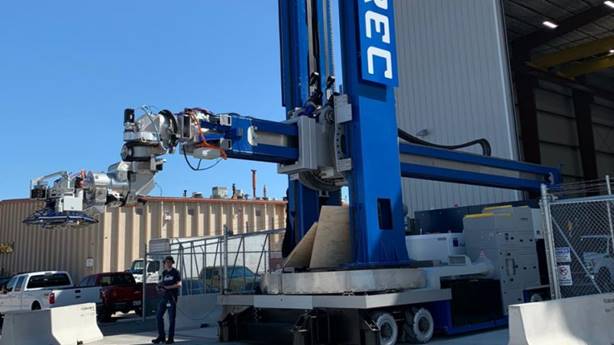 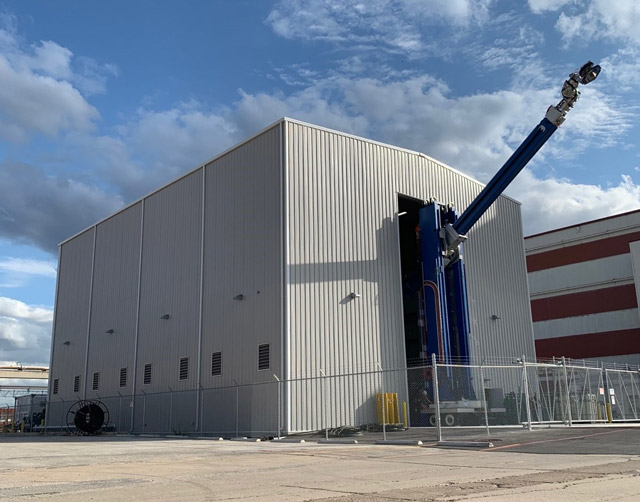 “San Antonio is clearly where we needed to launch our North American operations,” said Peter Boeijink, President and CEO of XYREC, Inc. “This community brings together essential ingredients we need to succeed. Here we have ready access to Southwest Research Institute’s robotics team, who have worked with us for many years to perfect our technology. And we are very glad to count on the strategic support of the team at Port San Antonio, who will give us a home where we can work directly with the biggest names in aviation,” he added.

“This combination of skills, location and market connections put us in a very strong position us to compete globally. The fabrication capability will also allow us to showcase our product in San Antonio while we develop additional technologies that we can sell to a global clientele.”

“The presence of XYREC’s breakthrough innovation on our property creates another important competitive advantage for the growth of the aerospace industry on our campus and in the region,” said Port President and CEO Jim Perschbach.

“We are thrilled that XYREC has pioneered this technology with San Antonio’s own Southwest Research Institute and has chosen the Port as the home for its first North American operation," he added. "We are also extremely pleased that we can be part of the local team supporting XYREC’s plans to build additional units and develop other innovations right here in our community as they expand their global reach.”

Port San Antonio is already home to major sustainment operations by Boeing, StandardAero, GDC Technics, Knight Aerospace, GoAeroMX and a host of others that provide services that include airframes, cybersecurity, avionics, engine maintenance and customized interiors.

Alongside other industry marquee names in the region, and with the advent of XYREC’s new assembly operation, the community is a growing center providing “nose-to-tail” solutions to defense and commercial aircraft operators from around the world.

XYREC will continue to refine and develop its innovative solutions. Another important market for the firm is the application of similar laser solutions to de-paint maritime vessels which, like aircraft, operate for decades and require ongoing and costly re-painting. Traditionally, ship hulls have been de-painted using similar sand-blasting methods that are time- and resource- intensive and can negatively impact the environment.