Opened in 1999 at Kelly Field, the StandardAero operation today encompasses over 600,000 square feet of production, warehouse, and office space, including indoor and outdoor engine test sites. 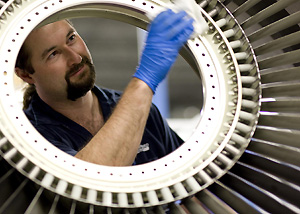 StandardAero is known for Operational Excellence. As a result of the closure of Kelly AFB, StandardAero quickly and successfully converted the military MRO operation into a private-sector function, making substantial investments to re-engineer and design the facilities for increased efficiency and specific performance parameters. The company retrained its workforce, and employees participated in and conducted the redesign of the processes throughout the facility.

The redesigned state-of-the art facility enables StandardAero to operate at high levels of efficiency and process control, and to also realize additional benefits such as exceptional quality, new machining capabilities, low engine turn time, and high engine reliability. Most importantly, the upfront investment in equipment and training enables StandardAero to exceed customer expectations for delivery and quality resulting in "Excellent" performance evaluation ratings from its customers.

A cornerstone of StandardAero’s San Antonio facility has been as as a leading global center of excellence in support of T56 engine projects—providing services for the Rolls Royce/Allison T56 turboprop, which powers the C-130 Hercules, P-3 Orion, and C-2 Cargo military aircraft. 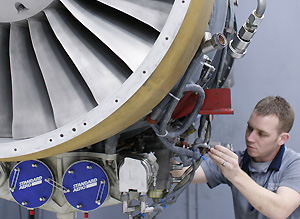 The San Antonio site also has a long-term agreement to support the Rolls-Royce RB211-535E4 engine lines, which power Boeing’s 757 aircraft—among the world’s most popular commercial airliners and air cargo aircraft.

StandardAero San Antonio is part of a global service network of facilities throughout the U.S., Canada, Europe, Singapore, and Australia. StandardAero celebrated its centennial year in business in 2011, marking a legacy of contributions to general and military aviation and a standard of excellence for which the company has come to be known.